Tómas Grétar Gunnarsson is an ornithologist and works at the University of Iceland. His main academic focus has been on the study of Icelandic waders. His research into the Black-tailed Godwit is part of an international project in which ornithologists from countries where Black-tailed Godwits occur at some stage of the year have combined to examine how seasonal factors affect the population of migratory birds. A key component of the study was to colour-ring Black-tailed Godwits, with each bird being given a unique colour combination. With the help of birdwatchers from around Europe it has been possible to monitor the movements of Black-tailed Godwits throughout the year and to shed some light on to the effect of seasonal factors on migratory birds.

Fewer than 10% of all mammal species are monogamous (where one female mates with one male and they raise young) compared with over 90% of birds. What is the reason for this difference? Two reasons are normally cited1. Firstly, mammals tend to have a relatively long gestation period, the young are suckled on milk and the female is responsible for both these tasks. The long wait that this entails encourages the male to move on as there is little he can do to increase his offspring’s chances of survival at this stage. Secondly, birds lay eggs which need to be incubated. This is an activity in which the male can participate and thus increase the chances of the young surviving. 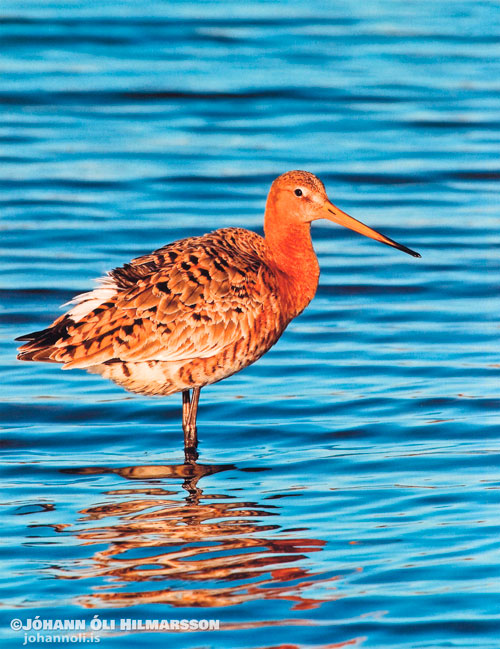 But although birds are generally monogamous, relationships are not always so straightforward. Ornithologists used to think that among species where the pairs form a social unit during the breeding season relations were harmonious. But with the advent of genetic studies and the ability to confirm the paternity beyond doubt, a different picture has emerged. In monogamous species, young parented by a different father to the female’s mate have been found in 75% of species studied.

Yet ignoring the odd case of infidelity, the social bonds of fidelity are generally quite strong during the breeding season and divorce is a relatively rare event. This is especially true of long-lived species where a pair has renewed its pair bonds year after year. In such cases the male and female have experience of one another and can makes things work with only a little of the awkwardness which can characterize new relationships. Studies on such species (e.g. swans and waders) have shown that breeding success often decreases after divorce but eventually improves again, when the new pair gains experience of each other3. An individual bird’s breeding success also decreases in the year in which a pair divorces as energy is spent on finding a new mate and this has a detrimental effect on breeding (see below). Divorce is therefore generally undesirable, even if birds sometimes change mates as the grass seems greener on the other side of the fence4.

One of things that can trigger divorce among migratory birds is the difference between the arrival times of male and female birds at their breeding sites in spring. If the mate does not arrive reasonably soon after the other bird arrives, the first bird does not have much time to wait. There are two main reasons for this; firstly the missing mate could be dead and waiting would thus be pointless; and secondly the breeding success of birds which breed later is usually poorer than birds which breed earlier in the spring. This pattern generally applies to most birds, except those which inhabit the tropics, and is linked to the availability of food, as it is beneficial if the chicks are growing when the supply of food (e.g. invertebrates) is at its maximum. If breeding takes place later, there is a greater likelihood of missing the greatest abundance of food. Therefore the first bird to arrive does not wait long for its mate but gets a new one. In species which remain together all year, e.g. geese and swans, this is not a problem as the male and female inevitably arrive on the breeding grounds at the same time.

The coordination of arrival times of paired birds on the breeding grounds has only been studied in a few cases where the males and females leave the breeding site separately at the end of the breeding season. In the case of Black Turnstones Arenaria melanocephala, which breed in Alaska,5 males and females which were paired during the previous year return to the breeding grounds on average two days apart, with the male generally arriving first. The same pattern has been observed among Common Terns Sterna hirundo in Germany6 except that females are more likely to return first. In both these species, there is a greater likelihood of divorce the longer between the arrival dates of the two birds. Although in both these species, the sexes separate in the autumn, it has not been possible to rule out that they meet up again on the wintering grounds or during spring migration, thus enabling them to coordinate their arrival times on their breeding grounds in the spring.

The third species in which the relationship between the divorce rate and arrival time of a pair at breeding territory has been studied is the Icelandic Black-tailed Godwit Limosa limosa islandica. A substantial proportion of the Icelandic population (1.5%) has been colour-ringed so that individuals can be identified. The wintering grounds of many of these birds are known because birdwatchers have diligently reported sightings of ringed Black-tailed Godwits. Icelandic birds winter widely along the coasts of western Europe. It has therefore been possible to identify the wintering grounds of 14 pairs of Black-tailed Godwits. In all these cases the male and female were shown to have entirely separate wintering grounds (average distance of 995 km between them). The shortest distance between a male and a female was 50 km, where the male was on the Algarve in southern Portugal and the female was over the border in southern Spain. The greatest distance measured was almost 2000 km, where the female wintered near Grimsby in eastern England and the male was lapping up the sun in southern Portugal.  Observations of flocks of Black-tailed Godwits arriving in Iceland at spring-staging sites (springs of 1999-2004) also revealed that males and females do not migrate to Iceland together as many paired birds were found without their mate being anywhere in the vicinity. So do paired Black-tailed Godwits arrive on their breeding territories at similar times in spring? Observations of the arrival times of paired birds (10 pairs) show that they arrive on average three days apart, and in some cases the male and female arrive at the breeding site on the same day. This is in spite of the fact that most Black-tailed Godwits arrive at their breeding grounds over a period lasting nearly a month from around 20 April to mid-May7. It is likely that among the species mentioned above, paired birds also spend their winters apart but the difficulties of monitoring these species outside the breeding season have hampered research into the winter factor.

Among Icelandic Black-tailed Godwits the divorce rate is about 10% among pairs where both birds return to the breeding grounds (37 pairs). Divorces tend to occur most frequently in cases where the male arrived too late at the breeding site. Among the 10 pairs in which the coordination of arrival times in spring was studied, three pairs coordinated their return poorly and there was about a week between the arrivals in each case.  In one case the male arrived first and waited conscientiously for his mate but in the other two cases the female showed up first. They both lost patience and had found new mates by the time the old mates finally turned up. This happened in the spring of 2003 but one of these females patched things up with her old mate in the spring of 2004 when he mended his ways and showed up on time. Whether any lesson can be learnt from this is best left unsaid.

So how do migratory birds coordinate their arrival times at breeding sites so precisely that they come at the same time? There are probably a number of interrelated reasons for this, but telepathy is unlikely to be one of them. When spring approaches and the sun gets higher in the sky something in the bird’s genes probably sends the first messages that migration is close at hand and that the bird should be thinking of moving on. In the case of Black-tailed Godwits this probably happens as early as February; observations of colour-ringed birds show that those that live farthest south in winter (Iberian Peninsula) begin to head north then. By doing this the birds which are furthest away begin to close the gap on those wintering further north. At the end of March/beginning of April (around 10 days before the first birds are seen in Iceland) almost the entire population has gathered in the British Isles and the Netherlands. The fastest confirmed flight to Iceland is about a day from Amsterdam to Reykjavík so distance itself is of little importance at this point.

Birds prefer to migrate in favourable wind directions and tend to wait for the ideal conditions for migration. This may help synchronize the birds’ movements even more if they all wait for the same weather system, even though they had been ready to depart at different times. When they arrive in Iceland the local conditions strongly dictate how soon they disperse to their breeding territories. If it is a mild spring they don’t spend long at staging grounds and soon move on to their breeding sites. However, if it is a cold spring and wetlands inland are frozen, Black-tailed Godwits gather in large flocks on coastal mudflats which are absolutely vital to the birds in such conditions. This period of waiting, from the first arrival in Iceland until dispersal to breeding sites, also probably helps to coordinate them too. The reason for this is that flocks can gather and later arrivals can catch up with the birds already present, before they all move on together when conditions allow.

By constantly weighing up and assessing the conditions and allowing plenty of time for migration, migratory birds can probably time their arrival on their breeding grounds with some degree of precision. This is vital for maintaining pair bonds and has wider implications for breeding and the utilization of temporary food sources in their northerly breeding grounds.

The vast majority of Icelandic breeding birds are migrants. Migrants live a double life and are influenced by events which occur on both their wintering grounds and breeding grounds. The relationship between divorce rate and the timing of migration is just one of myriad factors which migrants have to deal with over the year, and our understanding of seasonal effects on these incredible creatures is still far from complete.