Blue Whales (Balaenoptera musculus) of the North East Atlantic population are presumably feeding around Iceland in the months of June, July and August. Until 2004, these giants were observed every year off Ólafsvík (64°52’60”N, 23°43’0”W) on the Snæfellsness Peninsula in West Iceland. They appeared in Skjálfandi Bay in the northeastern part of Iceland in the summer of 2004. They were sighted from the whale watching boats starting from Húsavík (65°57’18”N, 017°25’31”W) and were viewed there every year except 2005. This preliminary study aims to figure out why the animals moved north and gives an overview on the animals’ distribution relatively close to shore in the years 1995-2008. 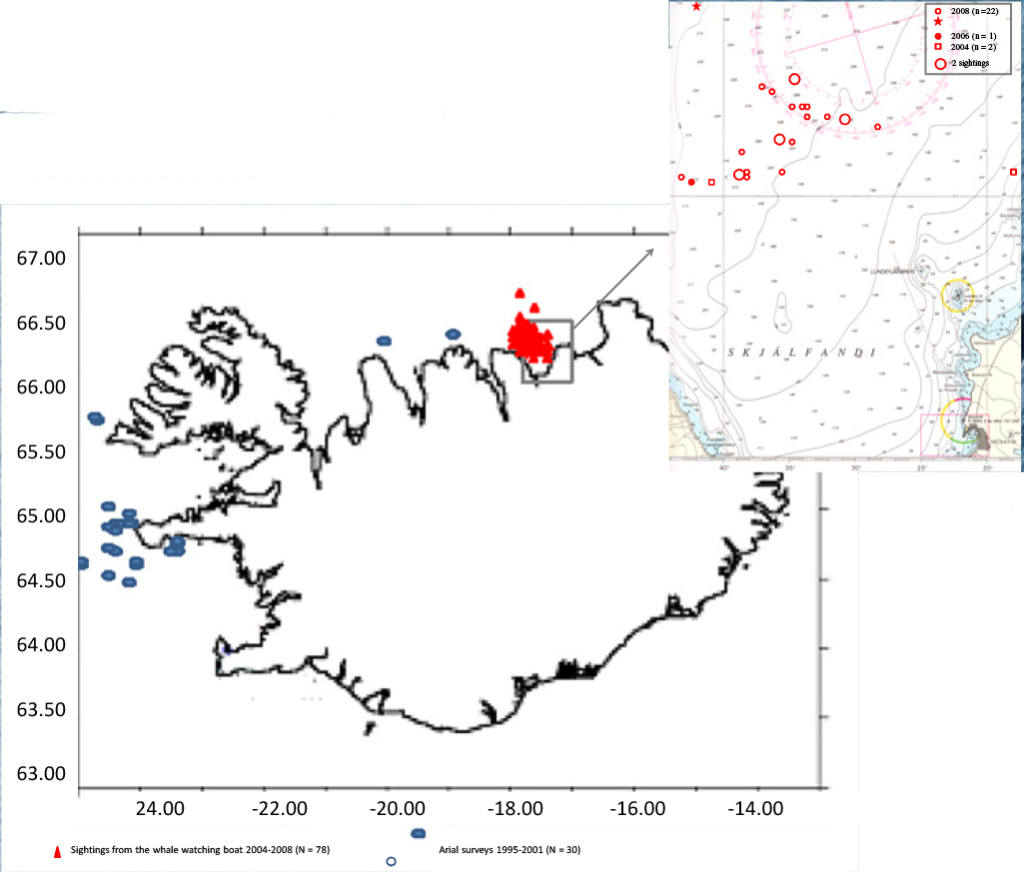 The main data used in this study were observations made from whale watching vessels in the Skjálfandi Bay and from aerial surveys of mainly west Iceland made by MRI in the period 1995- 2008. The aerial surveys were conducted as described in Donovan & Gunnlaugsson (1989). The sightings from the whale watching vessel were done by ad libitum sampling from the vessel, which search out the whales in familiar places based off of previous experience. This was done by the Whale museum in addition to photo-identification.
© M. Rasmussen
In 2008, the University of Iceland began a long term study on the Blue whales around Iceland, particularly in the Skjálfandi Bay area. The following things were conducted: Dive times by hand and stopwatch, zooplankton sampling, behavior, photo-id., pictures of the fish-finder and some acoustical tryouts. The differences in temperature were obtained from the Marine Research Institute’s database. 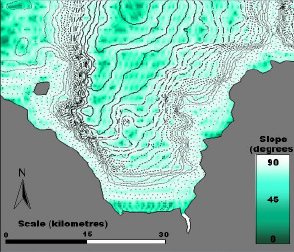 Figure 2: Bathometry of Skjálfandi Bay. The water depth is up to 230 m where the blue whales have been sighted in Skjálfandi Bay (A.Ceccehetti) 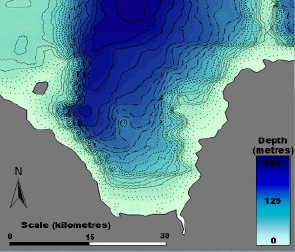 Figure 3: Slope of the Bay (A.Ceccehetti) 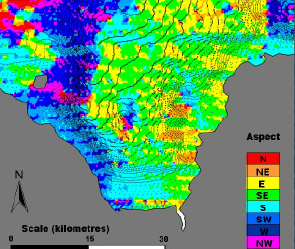 Figure 4: Aspect of the Bay (A.Ceccehetti)

Figure 1 shows that blue whales were sighted close to the Snæfellness Peninsula until year 2004 (Blue) and that they were sighted mostly near Skjálfandi Bay in the northeast after year 2004 (red). The temperature has increased 0.5°C in the western part of Iceland from 2000 – 2004 and the temperature difference between western and northern parts of Iceland is 2-3°C. The temperature differences are more pronounced deeper in the water column than in the surface and the difference in temperature at 200 meters of depth can be as much as 7°celcius at any given time. The shift to colder water occurs much shallower in the northern part of the island than in the western part. The whales were mainly observed to be feeding in the bay often in association with a small number of birds. The mean dive time in the area was 3 min. 47 Sec. (n=61) with a dive interval of 3.3 (n=51). Preliminary results of the plankton analyses (n=7) showed some Euphausiacea, however, the main contents were various copepod species and invertebrate larvae.

The Blue whales were observed more in the Skjálfandi area than in the Snæfellness area after 2004. Also the sea surface temperature showed to differ between the two areas which could suggest a potential reason of such distribution change. This needs further investigation. Skjálfandi Bay is characterised by having fresh water discharge from one or several large rivers resulting in an increased plankton bloom. Interestingly, the depth, slope and aspect seem to influence the sightings. Only a small number of euphausids was found in our zooplankton samples. This may be due to sampling method. Also big numbers of fish showed up on the fish finder during sightings which may indicate either that the whales eat small fish or that the whales and the fish are out for the same prey. The prey items and feeding behavior requires further investigations. The Preliminary dive records give a relatively short dive time which fits fine with shallow feeding, which correspond to the observed activity around 25-30 meters. Our photo identification studies suggest that there is little side fidelity for the whales in the bay, but again this needs much more investigation.