Blue whales have a large geographical distribution and previous studies have found that at least 10 distinct regional calls remain stable over decades. As a result, sound has been suggested to be a good indicator of subdivisions of the species(5). Blue whales have been observed feeding in June and July in Skjálfandí Bay, Iceland since 2004(2, 4). We aim to compare blue whale sounds recorded with two different methods, single hydrophone and Ecological Acoustic Recorders, to see if those two methods could be combined in future analysis on blue whale sound production and occurrence in Skjálfandi Bay. 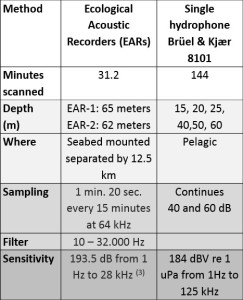 All files were amplified, low-pas and analyzed both aurally and using BatSound Pro software. Spectrograms of blue whale calls were done using a 1024-point FFT, 85% overlap, and Hanning window. Spectrogram correlation algorithm was used for finding blue whale downswept sounds on the EARs whereas the sound files from the single hydrophone were all manually scanned.

A total of 163 blue whale sounds were analysed and revealed 11 different sounds types, most in the audible range (table 2). Nine of these sound types were recorded by the single hydrophone and six by the EARs.

To analyze the occurrence and sound production of blue whales in a new area, it is very practical to combine these two methods. The recordings from a single hydrophone can reveal the variety of sound types produced by the whales as well as collecting greater quality of recordings due to closer proximity to the animals. This information creates basis for the construction of detection algorithms used for finding sound of interest in a long-term recordings within the same area. The blue whale sounds recorded in the Bay contained mainly frequencies between 19 to 261 Hz. These frequency ranges are comparable to blue whale frequencies worldwide (e.g. 9) and the moderate downswept calls, grunts, bubbling and blurps observed in this study corresponds roughly to the previously reported calls in the Northeast Atlantic by Berchok et al. (2006). However, the downswept calls are seen more or less worldwide (e.g. 6; 8 & 10). 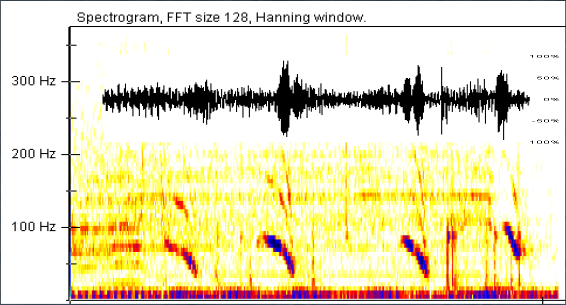 Figure 1: An example of four down swept calls in a phrase with the amplitude of the calls 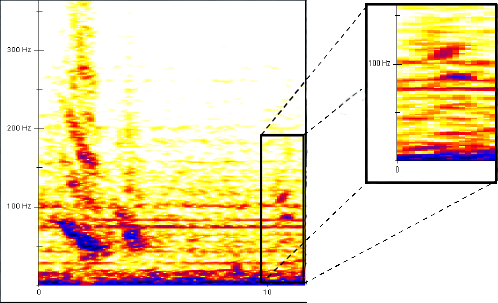 Figure 2: An example of one of the small constant call which often follow a downswept call. 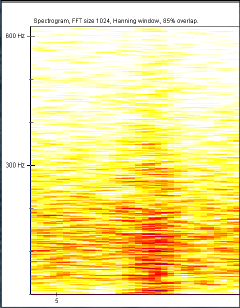 Figure 3: An example of a grunt

(4)Magnúsdóttir, E. E., Rasmussen, M. H., and Lammers, M. O. Combining visual and fixed passive acoustic methods to measure the variability of cetacean occurrence at the NE-coast of Iceland. Lecture at the 159th Meeting of the Acoustical Society of America, Baltimore, Maryland, 19. – 23. April 2010.