Oedipus Rex – The extraordinary love life of the Gyr Falcon

I have been conducting studies on Gyr Falcons since 19812. My study area is the region of Þingeyjarsýslur in north-east Iceland and it covers approximately 5,000 km2. In this vast area there are more than 80 known Gyr Falcon territories. The territories are used from generation to generation. The aim of my research has been to throw light on to the relationship between the Gyr Falcon and Rock Ptarmigan, more specifically the role of the Gyr Falcon in the fluctuations in the Rock Ptarmigan population. Therefore every year I visit all the Gyr Falcon territories in the area to assess the size of the population, the birds’ breeding success and their diet. One of these territories, assigned the number 212, is located in an area of rough lava. Gyr Falcons have occupied this territory since time immemorial and have used grassy ledges, hollows and Raven’s nests in low cliffs as nesting sites.

Gyr Falcons have used this territory every year since I started coming here in 1981. The female which lived there from 1985 to 1995 was unforgettable: large, grey and extremely fierce, to put it mildly. She raised young on six occasions in these 11 years. It is the only Gyr Falcon which has struck me, which happened once when I was crawling on to the nest ledge to ring the chicks. We managed to catch this female twice and her mate once. In the spring of 1996 she was found dead, not far from the territory, and she had died earlier that winter. Gyr Falcons were present on this territory during the next few years but there was no indication of breeding. 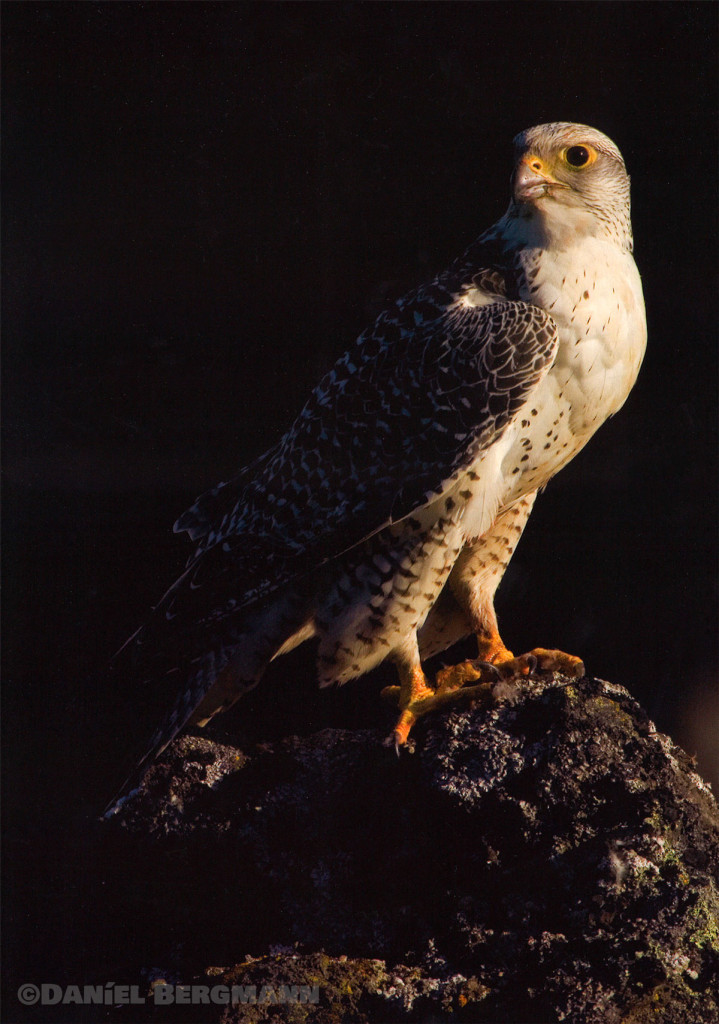 It was not until 2000 that things started to happen. On 30 June 2000 I was walking the tricky path through the territory looking for signs of the birds, splashes of droppings on perches and patches of down where they had been eating Rock Ptarmigan. All the signs were there, fresh droppings splashed on rock outcrops and Ptarmigan feathers drifting on the breeze. Suddenly I caught sight of the birds themselves, 50 to 60 metres away; one was conspicuously pale, silver, while the other was dark and resembled a Peregrine Falcon. The strange thing was that the pale bird was the female and this is one of the few cases I know of where the female was paler than her mate. It is also the palest bird I have seen in Iceland and she was easy to recognize by her colour. She had not bred that spring but the pair had engaged in courtship, as witnessed by the patches of down and the recently excavated nest scrapes on ledges. During courtship the female stops hunting and the male brings her food to the nest cliff and in the height of passion the birds excavate and test nest scrapes on ledges.

The following spring I did not find any signs of courtship but a roost with new droppings showed that territory 212 was again occupied by Gyr Falcons. Finally, in the spring of 2002 the birds bred. They were clearly the same birds that I had encountered in June 2000, the silver female and the dark male. In fact they had made a nest on the same ledge that they had been on in 2000. Two chicks were raised in 2002, both males and both almost fully grown when I ringed them on 4 July. Over the next four years, from 2003 to 2006, the pair raised 4, 3, 4 and 3 young respectively.

Film-maker Magnús Magnússon managed to capture several excellent sequences of these birds and their young from 2002 to 2006. Daníel Bergmann also photographed them on several occasions and his pictures have been published widely. In June 2007 Daníel visited the territory again, found the birds and photographed them. I realized when I looked at his photos on 29 June that there was a new male around. It was the same female, the silver one, but the male was different, much paler, but still not as pale as the female. In male Gyr Falcons, the colours are stronger than in the females, both in the plumage and the bare parts.  And so it was with the new male, a beautiful grey colour with a strong contrast between the breast and back and the same sharp division on the head between the crown and cheeks. The legs, the cere and eye-ring were bright yellow: a fine looking Gyr Falcon, any way you look at it. Another thing we noticed was that the male bird was ringed; now it was starting to get exciting. Daníel had managed a few times to photograph a ringed bird so that it was possible to read the ring; he’d even managed it with Gyr Falcons before. On the photos of the new male, two of the digits could be made out but three or four more digits were needed before we could establish where the bird came from. I set Daníel the challenge of going back to the scene and finishing the job. And he did so with spectacular results.

My son Ólafur Hrafn and I had been out in the field observing Gyr Falcons all day and we had just returned to our lodgings near Mývatn to prepare the evening meal when Daníel came in with the photos he’d taken during the day. After a while, and by comparing photos in the computer which showed the bird perched and in flight, it was possible to read the entire sequence of numbers on the ring: 123537. “Got it, where did you ring that one?” asked Daníel. I began looking through files of ringed falcons while Daníel tucked into dinner. My colleagues almost choked on their food when I said in astonishment after I’d looked through a few files, “I don’t believe it, he’s paired with his mother!” Indeed, 123537 was one of the males from 2002, and now at the age of five, was breeding on his natal territory, paired with his mother and he was also the half-brother of four fledged young. It immediately brought to mind the Greek tragedy by Sophocles about King Oedipus and his cruel fate. Oedipus killed and usurped his father, King Laius, and then married his mother Jocasta while all the time being unaware of the true identity of either. The parallels with this story catch the imagination, but it is also an interesting case from a biological point of view, adding another piece to the jigsaw of our knowledge about when Gyr Falcons begin to breed and how they disperse. Hopefully there will be no showdown in territory 212 to match what happened in ancient Thebes, where Jocasta, on learning the truth, took her own life and Oedipus put out his eyes and left the kingdom.

There are two probable explanations for the disappearance of the old male in territory 212. He either died of natural causes in the winter of 2006-2007 or he was overpowered by his son in a dispute over the territory and was driven out or killed. My studies have revealed that Gyr Falcons remain on their territories throughout the year for their entire lives. Gyr Falcons defend the immediate environs of the nest site but hunting grounds are shared. On a few occasions I have witnessed clashes between Gyr Falcons on an occupied territory and in most cases the resident male has been running another male out of town. I have never seen Gyr Falcons fighting away from the nest site as they forage so widely when hunting that their hunting grounds simply cannot be defended. Gyr Falcons in my area sometimes fly 20 to 40 km in search of prey and can thus cover vast areas when out hunting.

Ringing recoveries have allowed us to establish the age when Gyr Falcons reach sexual maturity in the case of four Gyr Falcons in Iceland: two males were recovered breeding at the age of four and two females were recovered aged two and three3. This is therefore the fifth known record. As far as I know there is one other similar record from Norway, where a male was found breeding at the age of three4. The general rule among raptors is that females reach sexual maturity earlier than males5. The dispersal of breeding birds also varies according to sex; males tend to settle closer to their natal territory than females5. The evolutionary explanation for this is that it reduces the likelihood of in-breeding and its inherent dangers. We have information on the natal territories of 12 territorial Gyr Falcons from Iceland, including Oedipus6 and one from Norway. These data correspond to what we know about other raptors, that males tend not to go as far from their natal territory as females. The average distance from the natal territory to the territory occupied when adult among seven male Gyr Falcons in Iceland is 17.8 km (range 0-24.8 km) and the Norwegian male set up territory 9.2 km from where he hatched. Data from five Icelandic females give an average of 52.8 km (range 20.3-84.4 km).

The behaviour of Gyr Falcon 123537, or Oedipus Rex as he has become known, conforms to what we already know about the life cycle of Gyr Falcons. As with other males, when he reaches sexual maturity he returns to establish a territory close to where he grew up. This is the first Gyr Falcon we know of which has gone all the way back to where it hatched and in this bird’s case he found his mother already there. Gyr Falcons are long-lived; the oldest ringed Gyr Falcon in Iceland was 17 years old, so there must always be some chance that the parents will one day be faced with the sight of a returning son, ready to take over the territory with all its benefits.