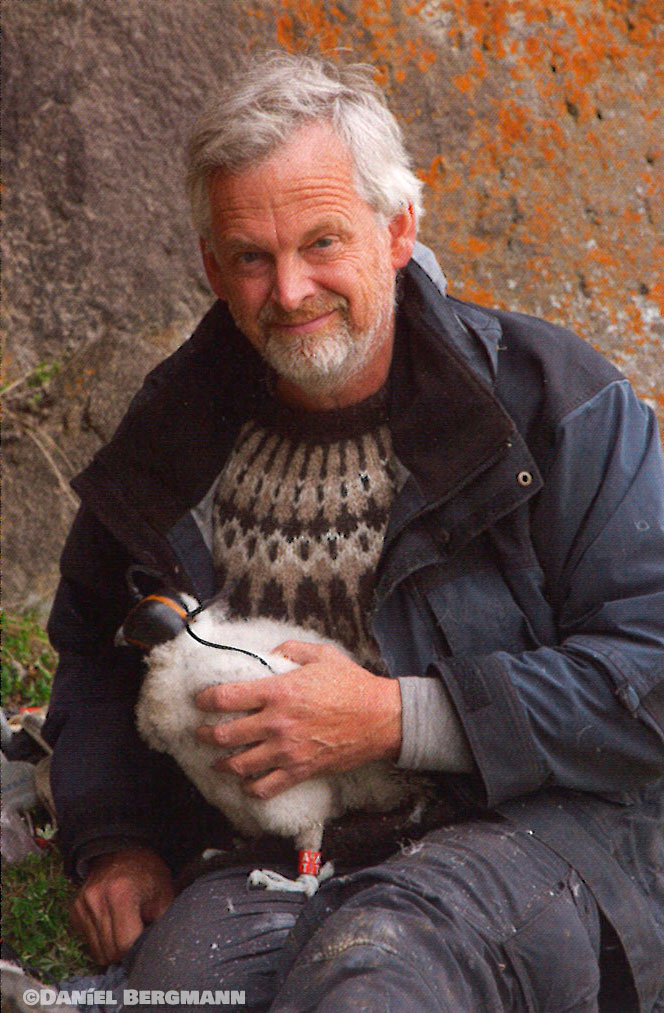 I have conducted studies on the ecology of Gyr Falcons since 1981 and the study area is the Þingeyjarsýslur region of north-east Iceland. In 1987 and 1988 I experimented in catching and ringing birds holding territories2. The plan was to systematically visit a sample of territories every spring for several years and to capture adult Gyr Falcons and read their rings or ring those yet to be ringed. This method has been used to in the study of mortality and recruitment in raptor populations3. It is assumed here that the territorial bird is dead if the territory is deserted or if a bird of the same sex has replaced it. These studies of mine were unsuccessful as it proved too time-consuming to capture the birds and I didn’t get a sufficient sample size.

My experience in the 1980s meant that I didn’t think about studying the demographics of Gyr Falcons for many years. It wasn’t until the beginning of the last decade after I read an article about how genetics could be used to identify individual birds that I saw the light! Now there was a way to answer these questions, all I needed was the help of a geneticist. It was easy to get biological samples from territorial Gyr Falcons without needing to catch the bird. They can be obtained from chicks while they are being ringed and the samples can be used to isolate the birds’ genetic material. Samples can be obtained from feathers shed by adults, feathers plucked from chicks and droppings. The method has been tested for Icelandic Gyr Falcons and in the spring of 2011 Lára Guðmundsdóttir completed her Master’s from the University of Akureyri on the genetics of the Gyr Falcon4. By amplifying and analyzing 13 microsatellites it was possible to identify individual birds. Lára’s supervisor was Dr Kristinn P. Magnússon, geneticist at the Icelandic Institute of Natural History and the University of Iceland. This method opened up previously closed doors as it is now possible by analyzing biological samples to record the occupancy by individuals of territories between years and the dispersal of chicks into the breeding population. 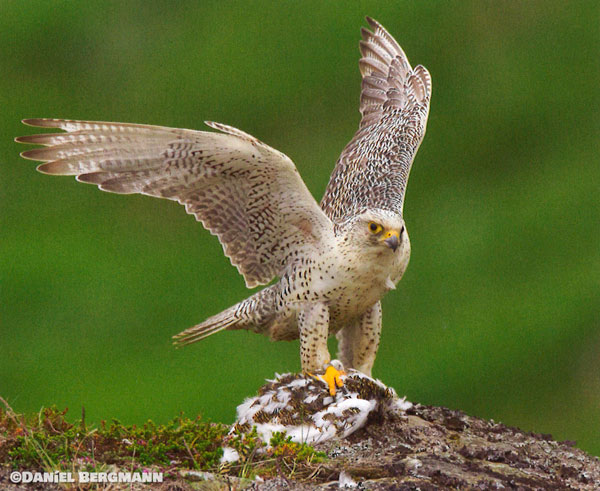 The disadvantage of genetic analysis is that each sample is expensive and time-consuming to process. It would therefore be ideal to use other, quicker methods to identify individual birds in tandem with genetic analysis. This would be possible by reading the rings of territorial Gyr Falcons as about half the birds in my study area have been ringed, all as young in the nest. As I mentioned earlier attempts to catch birds in order to read the rings didn’t go well, but recently another opportunity has opened up. With the advent of digital photography and by using high quality lenses with tracking focus it is easy to see if a bird is ringed. With a bit of skill it should be possible to read the figures on a metal ring and reading a colour ring should be relatively straightforward.

The aim of this article is to describe the colour-ringing of Gyr Falcons which started during the summer of 2011. Until then Gyr Falcons had only been ringed with metal rings. Colour rings are red with white letters. The ring is placed on the bird’s left leg while a metal ring goes on the right leg. There are two letters arranged vertically. Last summer 39 Gyr Falcon chicks in north-east Iceland were ringed in this way. The rings can be read using binoculars but the best way to do it is to get a photo. I would like to encourage anybody seeing a Gyr Falcon in the field to try to get a photo in order to ascertain whether it is ringed.

I have already received my first report of a colour-ringed bird. It was a male ringed in Norður Þingeyjarsýsla in north-east Iceland on 25 June 2011. The same bird was then seen 250 km away from its hatching site in October. There is in fact an interesting story connected to this bird. On 29 October a Cattle Egret (Bubuculus ibis) was discovered at Höfn in south-east Iceland. Cattle Egret is a very rare bird in Iceland and it attracted birdwatchers from far and wide. The bird remained in the area for the next few days and it was still there on 1 November when Brynjúlfur Brynjólfsson saw it at its favoured location. Then things began to hot up, as suddenly, out of nowhere a Gyr Falcon appeared, grabbed the egret and flew off with it in its talons. Cattle Egrets are not particularly heavy, 300-400g, and should be easy prey for a Gyr Falcon but it somehow managed to get the bird tangled in a fence. Brynjúlfur intervened and seized the chance, scared off the falcon and picked up the egret which appeared to be totally unharmed. The Gyr Falcon reacted angrily, flapped around above Brynjúlfur’s head and screeched. The bird was close enough for Brynjúlfur to notice a red ring on the bird’s leg. The bird was still present and in a foul mood when Björn Arnarson showed up shortly afterwards with a camera and managed to get a few shots. They didn’t dare release the egret with the falcon still in the vicinity so they put it in a box in the back of the car. They looked at the photos while they waited in the car and were able to read the letters BY on the ring. It turned out to be the bird I had ringed earlier that summer in northern Iceland.

Two hours later things peace had returned to the scene and the Gyr Falcon was nowhere to be seen. The coast was now clear to release the Cattle Egret. I’m sure the two birders wished the egret well as it flew out of the box and across the fields. But then what happened? Along comes a Gyr Falcon again and grabs the Cattle Egret. This time nature had to take its course and the Cattle Egret met death in the guise of a Gyr Falcon. The interesting thing is that photos showed this to be a different Gyr Falcon. While it was a first winter bird like BY, this one lacked a ring. It just goes to show that you can’t outrun your fate.