Tour starts in Reykjavik and we drive to Reykjanes. We head towards small villages of Garður and Sandgerði where we should get out first glimpse of Iceland’s common roadside birds, such as Whimbrel, Common Redshank and European Golden Plover doing its slow butterfly wing display flight. We then go to the southwest tip of Reykjanes peninsula to see the hot springs and the vigorous sea hammering the cliffs. We then continue on through the mossy lava fields of the Reykjanes peninsula, by-passing the capital, until we reach our destination for the night, Borgarnes. In the evening we can make a short trip inland to look for the very local Eurasian Woodcock perform its display flight. On the way we will pass extensive mudflats which will hold waders and the locally rare Common Shelduck. These birds will be keeping a careful eye out for the White-tailed Eagle, which breeds in the area, and with some patient searching we may see this majestic raptor. Night at Borgarnes. 220 km 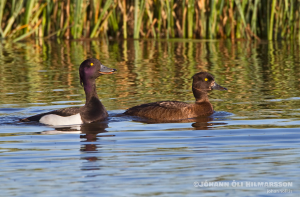 We head out on to the spectacular Snæfellsnes peninsula, with its rich diversity of habitats. The lakes on the flat plains by the sea hold very dense numbers of breeding Red-throated Diver and Arctic Skua, while on the rivers tumbling down from the mountains we might encounter our first Harlequin Ducks. The roadside lakes along the southern edge of the peninsula hold a typical mosaic of wetland species including Great Northern Diver and Horned Grebe, and scarcer ducks such as Northern Shoveler. At the end of the peninsula is the Snæfellsnes National Park, crowned by the glacier filled volcano Snæfellsjökull. The lava fields here are home to Rock Ptarmigan and leucorhoa race Northern Wheatear. The attractive basalt cliffs at the end of the peninsula hold colonies of all five breeding Icelandic auks, including Brünnich’s Guillemot, plus large numbers of Black-legged Kittiwake, while Arctic Tern is abundant along the coast. Killer Whales are frequently seen along this section of the coast. The northern side of the peninsula is quite different in character to the southern shore and has huge numbers of breeding Glaucous Gull and will give gull enthusiasts the chance to study large gulls in every possible plumage! The village of Rif is the site of a vast Arctic Tern colony, which can make stepping out of the vehicle in some places a risky business as the terns dive bomb unwary intruders! Common Eider is abundant along the coast and careful searching may reveal a lingering King Eider. The harbour in the village of Grundarfjörður is usually a reliable place to find tame Purple Sandpipers. Night at Stykkishólmur. 230 km.

In the morning we take the ferry “Baldur” named after one of the Nordic Gods, over Breiðafjörður fjord to Brjánslækur. The boat trip takes about 3 hrs, but on our way we´ll make a stopover in Flatey Island for few hours to enjoy the timeless atmosphere of the island and its varied birdlife. Atlantic Puffins and Black-legged Kittiwakes are common in this area and Northern Fulmars are a constant companion alongside the ship. From Brjánslækur we’ll drive to the fishing village of Patreksfjörður where you will stay at Fosshótel Vestfirðir. 130 km.
Day 4 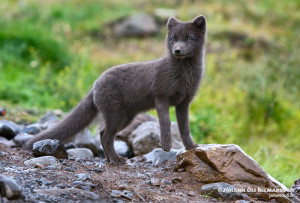 From Patreksfjörður we’ll drive to Látrabjarg cliffs (about 1 hr) where we’ll take our time to explore the birdlife here. Driving to Látrabjarg feels like reaching the end of the Earth and it is the westernmost part of Europe. Látrabjarg is the largest bird cliff in Europe, stretching 14km miles and reaching 441m at the highest point, containing around 2 million seabirds. The sheer number of birds here is simply staggering. Atlantic Puffin is common and very tame here, and the cliff also holds huge number of Razorbill, Common Guillemot and Brünnich’s Guillemot, while the area around the car park is home to singing Snow Buntings and Northern Wheatears. After Látrabjarg we will drive towards our next base at Laugarbakki with stops on our way for birds and nature. 330 km.
Day 5

On day 5 we will be travelling to the north-east of Iceland but we will start the day at the river mouth in Blönduós, often a haunt of Iceland Gulls in summer. On one of the valley bottoms we will have a look at family parties of Pink-footed Geese and Harlequin Ducks. Wooded areas in the area hold good numbers of Common Redpoll, Eurasian Wren and the abundant Redwing. At Akureyri we will see our first Common Gulls by the road. Night at country hotel at Aðaldalur, near Húsavík. 270 km.
Day 6

Lake Mývatn (Midge Lake) is one of Europe’s great birding destinations. The midges, actually harmless chironomids, are the mainstay of life at the bird rich lake, home to thousands of breeding wildfowl. Barrow’s Goldeneye, at its only European breeding site, is common here. It shares the lake with other ducks such as Common Scoter, Gadwall, Eurasian Wigeon, Long-tailed Duck, Greater Scaup and Tufted Duck, while American vagrants such as Ring-necked Duck and American Wigeon are recorded regularly at this superb site. Harlequin Ducks are common on the river Laxá, which flows out of the lake, while Horned Grebes are confiding and highly photogenic on the lake itself. Great Northern Divers and Red-throated Divers provide the background noise, while arguably the main attraction at the lake, the Gyr Falcon, can occur anywhere in the area. The world’s largest and most powerful falcon takes advantage of the great numbers of Rock Ptarmigan, wildfowl and waders and several pairs breed in the area. Its smaller cousin, the Merlin, also breeds in the area, and if we are lucky we might see Short-eared Owl hunting in the 24-hour daylight. With fascinating geology and geothermal sites around the lake, a day at Mývatn is an unforgettable experience. Night at Aðaldalur. 140 km.

In the morning we start by visiting Goðafoss Waterfall and then to Lake Vestmannsvatn and River Laxá. During this we can expect to see several duck species, Great Northern Diver, Red-throated Diver, Horned Grebe, Red-necked Phalarope amongst other species. In the afternoon we take a boat trip to Flatey Island in Skjálfandi Bay close to Húsavik. On the way to Flatey Island, one can experience the beautiful surroundings of Skjálfandi Bay. Flatey Island was inhabited from 11th century but has been deserted since 1967 and is a natural haven for diverse birdlife. This trip lasts 4-5 hours, including an excursion on to Flatey. On the way whales are also frequently seen, such as Humpback Whale, Minke Whale and even the Blue Whale has visited the bay in recent years. Flatey is home to more than 30 different species of birds during the breeding season, including Arctic Tern, Puffins and Red-necked Phalarope.

Drive north on to the Tjörnes peninsula, where Rock Ptarmigan is frequently seen by the road. The wetlands around Víkingavatn hold a great diversity of breeding birds, including good numbers of Horned Grebe. The glacial sand flats east of here are in the domain of the Great Skua and we should be able to enjoy close encounters with this impressive predator. This area abounds with breeding waders, with Whimbrel, Black-tailed Godwit and European Golden Plover all abundant. We then visit the stunning horse-shoe canyon of Ásbyrgi before spending the afternoon birding Iceland’s far north-eastern peninsula, Melrakkaslétta. This wild and remote area has an Arctic feel to it and is a superb birding location in summer, with great numbers of Red-throated Diver, Snow Bunting and Purple Sandpiper and a very healthy population of Gyr Falcon. The beaches may still host some lingering Arctic shorebirds and rarities are regularly seen in this area. Night at Raufarhöfn, just south of the Arctic Circle. 180 km.

In the morning we will check out the mudflats at Höskuldarnes before heading south along the coast, where we check out the numerous lakes and coastal sites en route. Our main destination today is Langanes, the long finger of land at Iceland’s north-east corner. The cliffs at Skoruvíkurbjarg hold excellent numbers of auks, including abundant Brünnich’s Guillemot, while rock stacks just off shore are home to a very approachable colony of Northern Gannets, providing excellent photographic opportunities for this species. Night at Aðaldalur. 320 km

Today we go back to the Lake Mývatn area for a closer look at the natural attractions there. Dimmuborgir Lava Field and hiking on mount Hverfjall and to the latest lava field (from 1970s and 1980s) at Leirhnjúkur. We will also visit Dettifoss waterall the most powerful one in Europe. Before we go back to Hotel Rauðaskriða we relax in the Mývatn Nature Baths (blue lagoon). Night in Aðaldalur. 220 km.

Today we will travel to the east of Iceland with our destination at Egilsstaðir. After passing Lake Mývatn for the last time we will mainly be driving in the semi-highlands and if weather allows we’ll be able to see the queen of Icelandic mountains “Herðubreið” on our way. This area usually holds good numbers of Pink-footed Goose and we might also see Reindeer and Arctic Fox on our way towards east. 250 km.

After breakfast we start our journey to Breiðamerkurlón Glacier Lagoon. On our way we enjoy the dramatic coastal scenery as the road winds its way along a narrow strip of land between steep mountains and high mountains. At Djúpivogur we will stop and bird at the rich mosaic of ponds and inlets beyond the village, a stronghold for locally scarce Icelandic birds such as Common Shelduck and Northern Shoveler. At the scree slopes near Hvalnes, we can scope the flocks of seaduck for vagrants such as Surf Scoter and Velvet Scoter and perhaps a lingering King Eider. Once we have reached the Höfn area the coast gets sandier and we start to see the biggest glacier in Europe, Vatnajökull Glacier. Our accommodation is close to the Glacier . This area is the domain of the mighty Great Skua, an unmissable bird here. Harbor Seals often swim between the icebergs on the lagoon. 230 km.

We drive from the Glacier Lagoon at Breiðamerkurlón to the village of Hella today. First we will visit Skaftafell National Park and see the highest mountain in Iceland if weather allows, Hvannadalshnúkur (2110 m.a.s.). From Skaftafell we pass Mýrdalssandur “desert” and drive on to the small village of Vik, where Atlantic Puffins breed in the cliffs and a huge Arctic Tern colony occupies the beach. The nearby cliffs at Dyrhólaey are also home to breeding Common Guillemot and Razorbill. On our way west we will visit many interesting places like Skógarfoss waterfall close to the Eyjafjallajökull Glacier and volcano, which last erupted in 2010 with significant repercussions for air traffic between Europe and America. We will also visit Seljalandsfoss waterfall, which you can walk behind. Finally we reach our base for the night at Hella. Total drive around 300 km.

No visit to Iceland would be complete without visiting the world famous geothermal field at Geysir and the thundering waterfall, Gullfoss – the Golden Falls. Those are our first places to visit today. After Gullfoss and Geysir we drive to Þingvellir National Park, the site of the ancient Icelandic parliament where the divergent American and Eurasian tectonic plates are as plainly visible as in a geology textbook. The park has Harlequin Ducks, both divers, Eurasian Wren and breeding Greylag Goose to name a few. From Þingvellir we head back to Hella for the night. 250 km.

In the morning we head for the south coast and visit BirdLife Iceland’s bird reserve at Flói, where breeding Dunlin, Red-necked Phalarope, Arctic Skua and Red-throated Diver abound. From Flói we drive along the south coast towards Keflavik airport with stops at Krýsuvík (geothermal site) and Grindavík, a small fishing village. We can use the last day to try to see anything we may have missed and enjoy the stark volcanic scenery of the south-west. 200 km.

All transport on ground
Expert guide
Accommodation in a dbl room with private facilities.
Breakfast for days 2-15
Lunchpacks for days 2-14
Dinner for days 1-14
A bottle of water for each day
Two boat tours (Whale watching, Bird watching,)